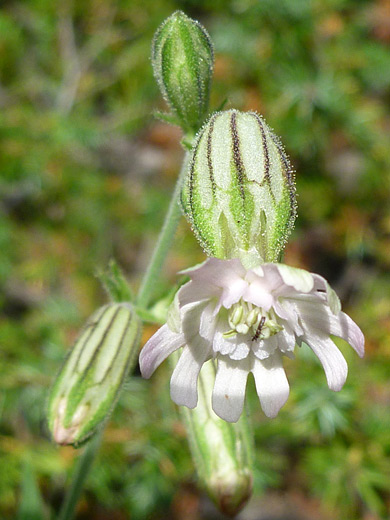 The five petals of silene drummondii are small, generally as wide or 1.5 times as wide as the calyx tube, which may be tubular or slightly wider in the middle, not markedly inflated as is the case for many other campion species. They are colored white or very pale pink, and are divided into two lobes at the tip. The calyx has 10 dark purple veins and a covering of very short, glandular hairs; the upper edge forms five pointed lobes, greenish at the center and the very tip, white at the edges. The erect stems grow singly or in small groups, branching from the base. Flowers form in small clusters, sometimes containing as many as 20 heads, usually rather fewer. Most leaves are basal, but 2 to 5 pairs of opposite leaves are found along the stem.

Subspecies drummondi, a plant found mostly on the plains, has shorter petals (the same width as the calyx) and is more likely to form larger clusters, while subspecies striata, found in mountainous areas, has petals 1.5 times as long as the calyx width, and forms smaller clusters, usually up to 4. 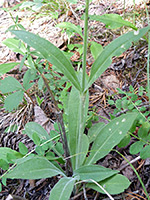 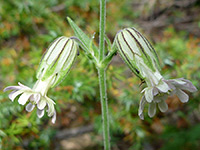