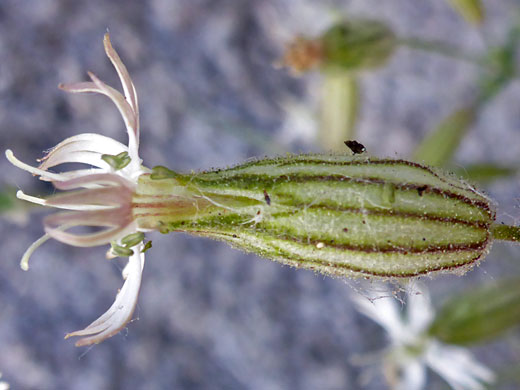 Silene bernardina is most commonly found all along the Sierra Nevada, and other mountainous areas of northern California, though it also occurs in the other Pacific states, and Nevada. The narrow leaves grow mostly at the base, where they are attached by slender stalks; there may also be up to four pairs of cauline leaves. Leaf surfaces have a covering of short glandular hairs, while the upper portion of the stem is also glandular; the lower stem is more sparsely hairy.

Flowers are produced in open clusters, at the end of slender, upwards-pointing branches, and also from the upper leaf nodes. Calyces are approximately tubular, slightly expanded around the middle, crossed by ten purplish veins, and divided into five narrow, triangular lobes. The lobes are about a quarter of the calyx length. The five petals are white to pink in color, deeply divided into four narrow lobes, with feathery white appendages at the base. The ten stamens have white filaments and green anthers. 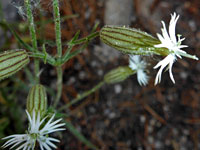 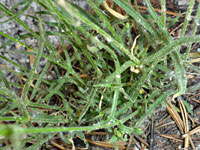 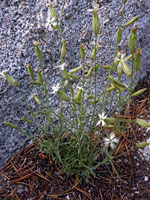