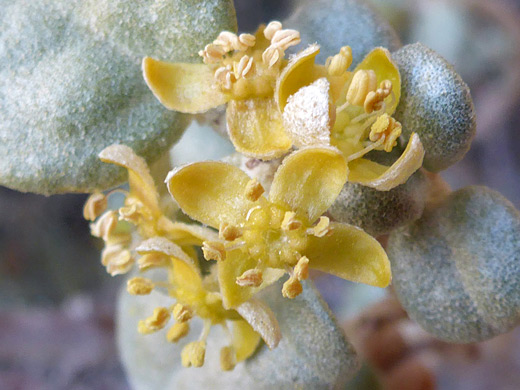 Flowers of shepherdia rotundifolia, a small to medium-sized shrub, are formed of four cupped, yellow, petal-like sepals - there are no petals - around a central nectar disc below either eight stamens or one pistil; plants produce both staminate and pistillate flowers. For the former, the filaments are short, and colored pale yellow, while the anthers are yellow-brown, and relatively large; the filaments are attached between the lobes of the nectar disc. Flowers are small in size compared to the leaves, growing at the top of the branches and from the upper leaf nodes.

Leaves are thick, grey-green in color, and have an irregular surface due to short, branched, scale-like hairs, and tiny yellow glands. Leaves tend to fold up slightly along the prominent midvein. Plants can exceed six feet in height, and width. This species is mostly confined to the Colorado Plateau of Arizona and Utah, also occurring in a small area of far southwest Arizona. 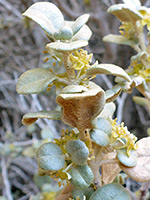