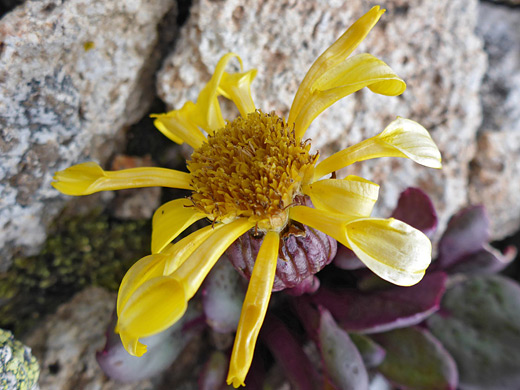 Yellow flowerhead of senecio soldanella along the Porphyry Basin Trail, San Juan Mountains, Colorado
Senecio soldanella is a low-growing, high elevation species, found in rocky places above the treeline. Leaves are produced mostly at the base; they are thick and hairless, purple at the edges and along the petioles, or sometimes all over. Leaf margins are usually lined by tiny teeth. Stem leaves are reduced to short, linear bracts. Plants produce one stem, also purplish, usually topped by a single, nodding flowerhead, less often two.

Flowerheads generally have exactly 13 yellow ray florets, their corollas up to half an inch long, around a center of numerous, yellow-orange disc florets. The 21 phyllaries are colored green to purple, and are hairless. At the base of the involucre are between three and five thin bractlets, about half as long as the phyllaries, otherwise similar in appearance. 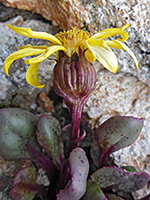 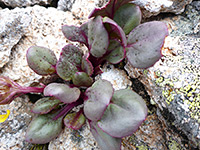 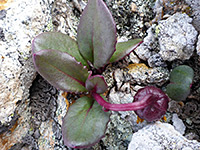