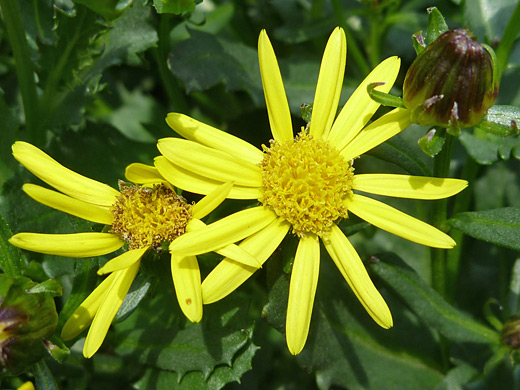 The small, thick, glossy leaves of senecio fremontii grow around the base but mostly along the stems, in a closely-spaced, alternate arrangement. Stems and leaves are hairless, while the leaves are lined with differently-sized, sharply-pointed teeth.

Flowerheads (about 1.5 inches in diameter) have between 8 and 15 yellow ray florets around the central yellow/brown disc florets. Buds are purplish, and the leaf edges (or just the teeth) may also have a purple tinge. Phyllaries typically number 8, 13 or 21, and they are rather wider than many other senecio species; beneath them are up to 5 (sometimes zero) bractlets, similar in appearance but less than half as long. Ray florets vary in width; they can be wide and almost overlapping or thin, somewhat twisted and well-spaced. Stems arch or grow sideways.

This is a common but low-growing species, reflecting the difficult conditions it inhabits, mainly rocky slopes and boulder fields at high elevations, though it can form large, showy, rounded clusters containing many dozen flowerheads. There are four varieties (blitoides, inexpectatus, occidentalis and fremontii), with discrete geographical ranges, differing in height, phyllary length and leaf characteristics. 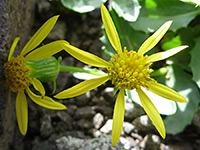 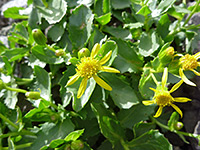 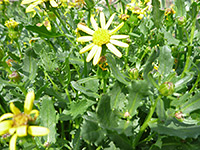 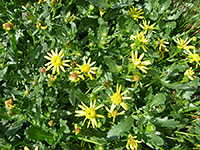 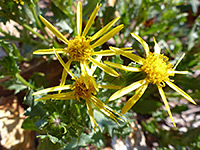 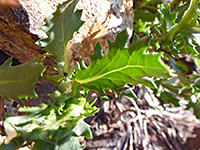 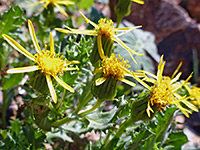 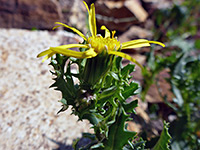 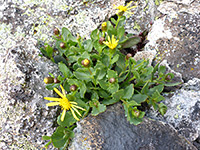 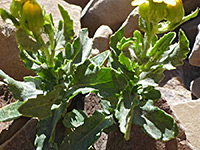 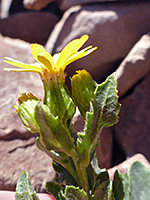