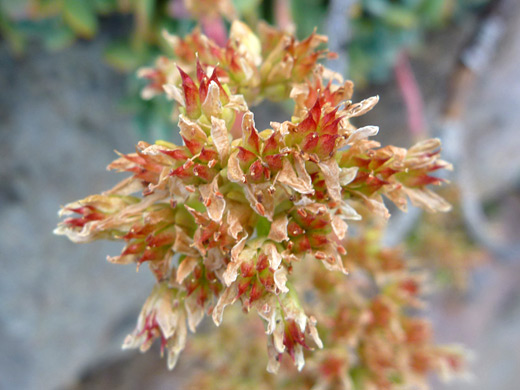 Identifying features of sedum oregonense include the pointed petal tips, the yellow color of the anthers, the widest part of the leaf (above the middle rather than below) and the hairless stems. Leaves are glaucous (grey-green), often purplish along the edges, and they usually have a little notch at the tip. The inflorescence is a somewhat elongated cluster, typically containing between 20 and 70 flowerheads, sometimes up to 120. The reddish flower stalk bears a few similarly-colored bracts, around half an inch long.

Flowers are formed of five obovate petals, a little less than half an inch in length, with pointed tips that extend to a tiny spike. Petals are colored pale yellow around the base, white towards the tip, and they may have a few red flecks. Anthers are reddish-brown or yellow. 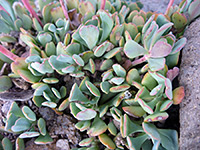 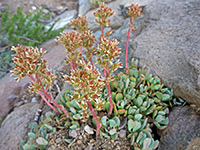