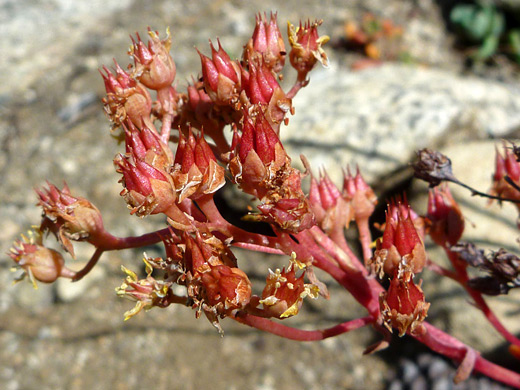 The Sierran stonecrop, sedum obtusatum, grows all across the Sierra Nevada, extending to the southern Cascade Range and adjacent mountains, found over a wide range of elevations and quite variable in some aspects. It is a typically low-growing plant producing compact rosettes of many small, thick, grey-green leaves (reddish in dry habitats), which are widest just below the tip. The upper edge may be flat, rounded or notched.

The inflorescence is a flat-topped cluster, borne on top of a reddish stalk several inches tall. Flowers have five pointed sepals beneath five larger petals, yellow to brown in color. Fruit are capsules (five of them), red, later brown, pointed at the apex.

There are four subspecies of sedum obtusatum (boreale, obtusatum, paradisum, retusum), differing in such aspects as anther color, petal color, petal venation, bract length, and the number of flowers in the inflorescence. 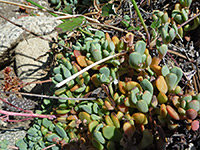 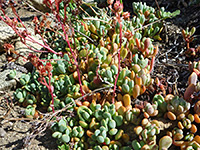 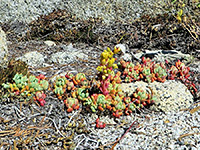