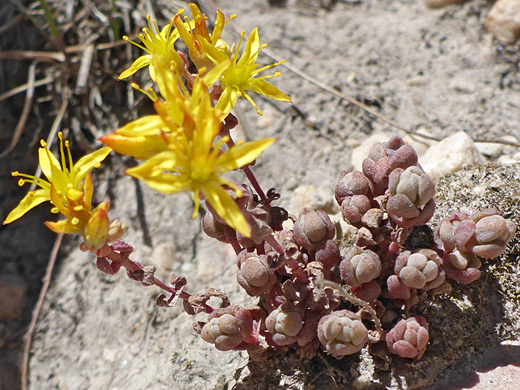 Leaves of sedum debile are quite distinctive, being thick, rounded, and pinkish in color, and they form little globular clusters at the base of the flowering stalks. Leaf surfaces are somewhat glaucous. All plant parts are hairless. The leaf-bearing stems tend to grow along the ground, rising towards the upper end. Leaf tips are rounded, sometimes with a small, shallow notch.

Flowering stalks are longer than the stems, up to 5 inches, and they grow vertically upwards or at an angle. They also have opposite leaves, more widely separated than those on the stems, and tending to wither by flowering time. Flowers are produced in a terminal cluster of between two and seven; each flower has five pale green, lanceolate, equally-sized sepals and five yellow, elliptic petals, around a third of an inch long. Petals are fused at the base. At the center of the flower are eight yellow stamens and five pistils. 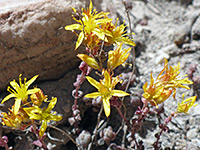