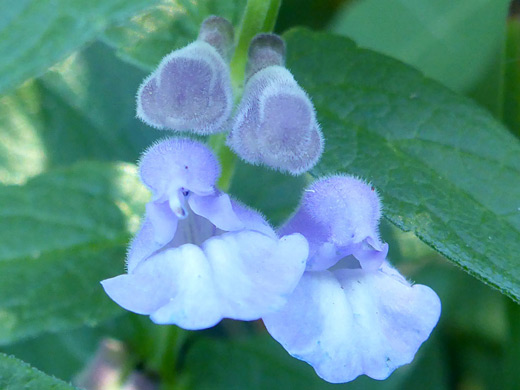 Stems of scutellaria galericulata are erect, square in cross-section, and either glabrous or covered by very short hairs, which point downwards; these are most noticeable along the edges. Leaves are generally not found at the base, only along the stem, in opposite pairs, about one inch apart. Leaf edges may be entire or coarsely, shallowly toothed. Upper stem leaves are sessile, while those towards the base have short petioles, up to 0.2 inches. Upper leaf surfaces are intricately veined, and somewhat shiny.

Flowers are produced in pairs from the leaf nodes; they have a short, greenish purple calyx and a much larger, blue or pale violet corolla, up to 0.8 inches long. The corolla opens to an arched, constricted upper lip and a wider, slightly recurved lower lip. Four equal-length stamens are contained within the upper lip. The lower lip is mottled with flecks of darker color, and its inner surface has a bumpy texture. The outside of the corolla has a dense covering of short hairs. Usually two or three pairs of flowers are in bloom at any one time. 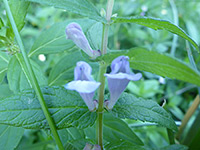