Plants > Wildflowers > Sapindaceae
Sapindaceae (soapberry) plants are trees, shrubs or woody vines, generally found in wooded environments. Leaves are usually opposite, often palmately or pinnately compound, and grow on stalks. Flowers are produced in clusters, at the tips of the stems and at the leaf nodes; they are formed of four or (usually) five sepals, and zero, four or five petals. Stamens number between five and 12.

Sapindaceae are found in most areas of the Western states, though are less common in the Great Plains; the US has 74 species in 25 genera, most numerous being acer (maple) and aesculus (buckeye). 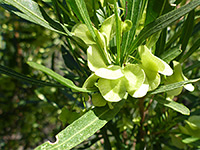