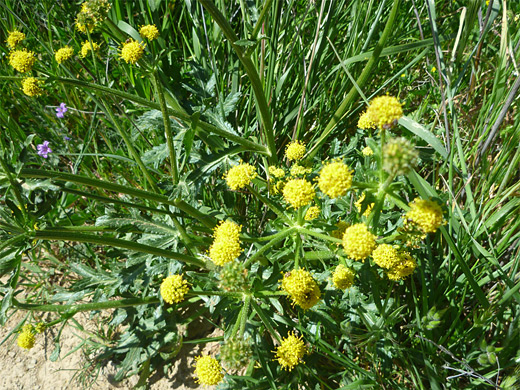 Leaves of sanicula arguta are divided into around seven main lobes, usually five branching from or near the stalk attachment point and another pair further along the central lobe. All segments have smaller pointed lobes, or large teeth, along the edges, terminating in short spines. Veins are quite prominent. The thick green stems divide a few times, around the middle, and each branch splits again near the top to a small number (3 to 5) of rays, each up to 4 inches long, topped by small, rounded clusters of tiny yellow flowers. Stems are ribbed, and have a light covering of tiny scales. Around ten leafy green bracts grow at the base of the inflorescence, often three-lobed.

Individual flower clusters contain around 20 heads, of which half are staminate flowers, the remainder bisexual. The stamens project well beyond the corolla lobes when mature. 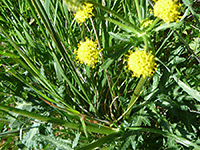