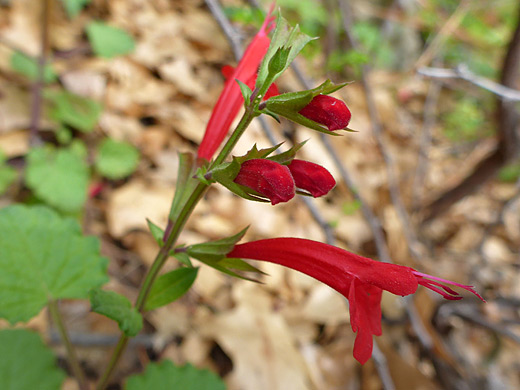 Stems of salvia roemeriana are square in cross-section, generally green but reddish along the ridges, and they branch from the base. Leaves and stems have a sparse to dense covering of very short hairs. Most leaves are undivided, ovate in shape with large, rounded edge teeth, though some basal leaves may be lobed. Leaf margins are purplish.

The tubular red flowers are about one inch long, borne singly or in pairs along the upper few inches of the stem. Two small, linear, leaf-like bracts grow at the base of the flower stalks. Flowers have a green, two-lipped calyx, the lower partly split into two narrow, pointed lobes, the upper with three much shallower lobes. The base of the corolla is much narrower than the calyx, though the tube widens above. The calyx has a three lobed lower lip, angled downwards; the middle lobe is larger, projects more, and is itself partly divided. The upper lip has two, small, forwards-pointing lobes. Inside the throat of the corolla are two red stamens, each with two white anthers, and a forked style. 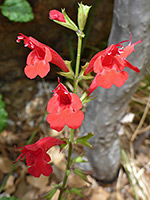 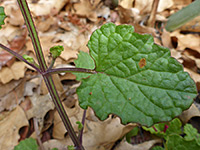 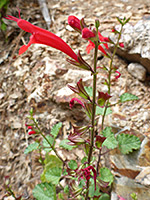