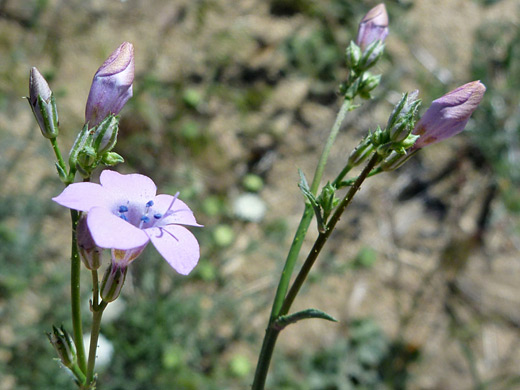 Sparsely glandular stems and buds of saltugilia splendens ssp splendens, along the Panorama Trail, Joshua Tree National Park, California
Saltugilia splendens is found only in far south California, from the southern coastal mountains, across the San Gabriel, San Bernardino and San Jacinto ranges. Plants have one stem which branches a few times, generally near the base. Stems are grey-green in color, mostly smooth but with a very sparse covering of tiny glandular hairs. Leaves are predominantly basal, growing in a flat rosette, lying against the ground or angled upwards; they are finely divided, and are covered by translucent hairs.

Branches typically bear 8 to 10 flowers, in open clusters. Pedicels also have a few well separated hairs, with glands at the top. The slender calyx is divided into five narrow, green lobes separated by slightly wider white membranes. The pale pink corolla is narrow at the base, steadily widening and opening about half way along to five spreading, obovate lobes. Five blue-tipped stamens protrude slightly beyond the corolla throat, as does a divided style. The outside of the corolla tube often has five yellow patches. 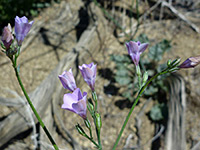 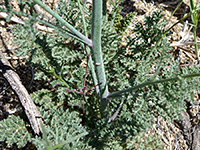 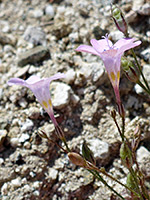 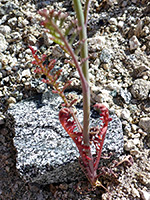