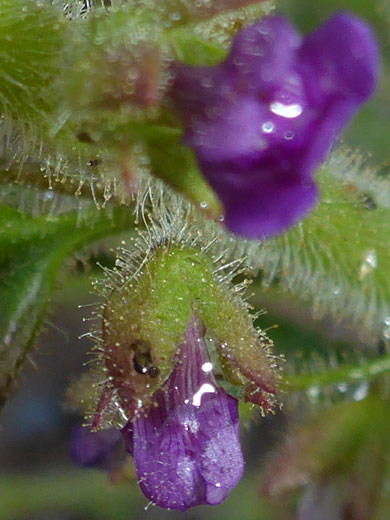 Sairocarpus nuttallianus (Nuttall's snapdragon), Camp Creek Falls, Arizona
Sairocarpus nuttallianus is native to southern California, from coastal regions between San Diego and Santa Barbara, and has become established in scattered parts of south and central Arizona. Stems are relatively long, up to six feet, but weak, and the plant often rests against rocks or uses other vegetation for support. Leaves and (especially) stems have a covering of spreading, glandular hairs, of varying lengths. Leaves have a tiny spike at the tip.

Flowers are solitary, from the upper leaf nodes, on glandular-hairy pedicels of up to 0.8 inches. The green, hairy calyces are bilaterally symmetric, deeply divided into five equal-sized lobes. Corollas, around half an inch long, are pale to dark purple, crossed by darker veins, with a white patch (the palate) at the center of the lower (three-lobed) lip. Plants also produce white cleistogamous flowers - tiny flowers which do not open. 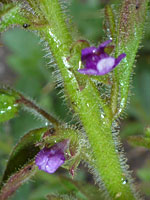