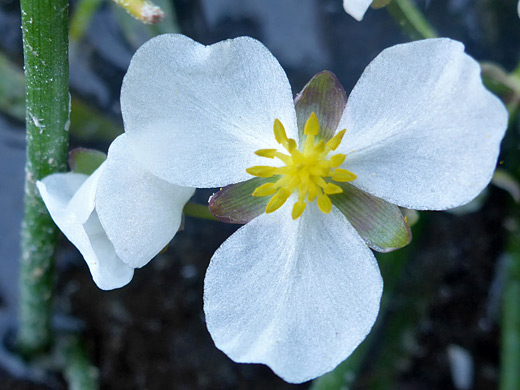 Sagittaria cuneata is a distinctive species that grows in shallow, still water; it produces arrowhead-shaped leaves and small white flowers with three-fold symmetry. Stems are prostrate, on or below the water, while the leaves are held just above. Leaves have a large lobe at the front and two narrower basal lobes, slightly shorter. Faint, palmate veins radiate from the attachment point.

Like many other species in the alismataceae family, plants are monoecious; a single specimen has both male and female flowers, centered respectively on 7 to 30 yellow stamens, radiating from the base, or a compact sphere of a hundred or more greenish pistils. Around these are three round, white petals, above three shorter greenish sepals. Sepals are curved upwards initially, becoming reflexed at the fruiting stage. Staminate flowers are found lower down the stems, while those further up are pistillate. 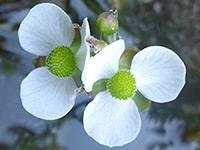 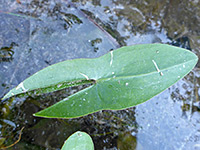