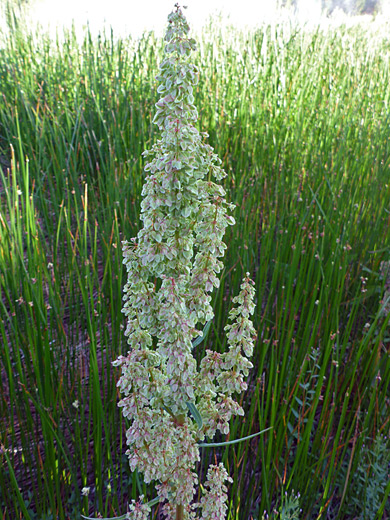 The common name of rumex crispus, curly dock, refers to the leaves, which are curved, and have wavy edges. This species originates in Europe, and has spread across most of the US, where it is most widespread in the Rocky Mountains and in California.

Stems are thick and grooved, reddish at the base, and bear large leaves at regular, alternate intervals. Basal leaves are the largest. Stems are usually branched, at and above the middle. Leaves have a lighter-colored midvein and pinnate side veins.

The branched inflorescence extends along the upper half, or more, of the stem, comprising many dense, closely-spaced whorls of between 10 and 25 small, whitish-green flowers. The flowers are formed of six tepals of which the inner three are larger, between three egg-shaped tubercles. One of the tubercles is bigger than the others. Flowers are followed by reddish-brown seeds. 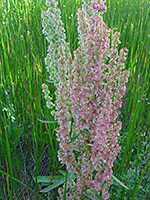 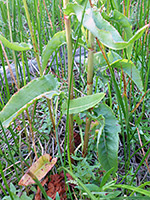