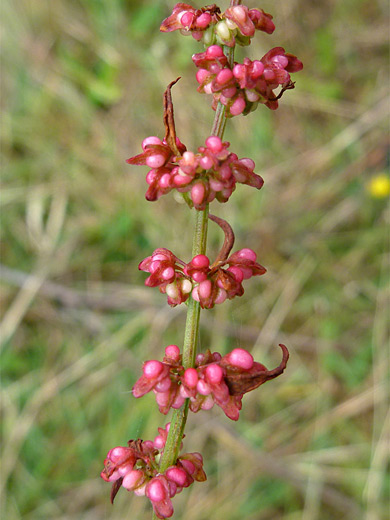 Rumex conglomeratus originates in Europe and Asia and has been introduced to several states in the US; it is most widespread in coastal regions of California. All plant parts are usually hairless. Stems grow vertically upwards, and may branch a few times above the middle. Large leaves grow at regular intervals along the stems; they have a prominent midvein and somewhat irregular margins. Leaf bases may be tapering or slightly lobed (cordate).

The inflorescence occupies the upper half of the stem; a series of compact, whorled clusters of small, pink or reddish flowers (numbering between 10 and 20), one inch or more apart; all but the uppermost few are subtended by leaves. Flowers are formed of six tepals, the inner three larger than the outer, between which are three egg-shaped tubercles. The fruits (achenes) are initially pinkish, ageing to brown. 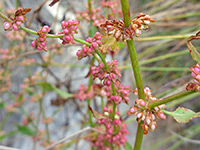 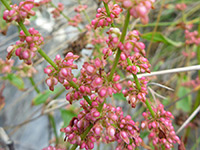