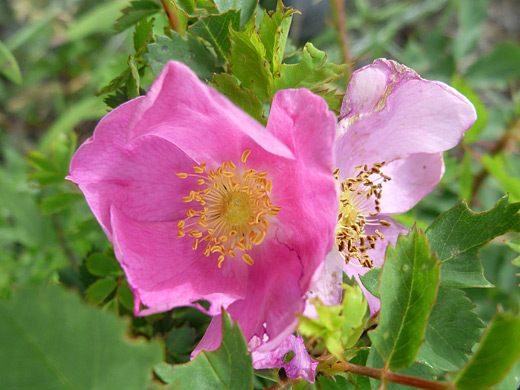 Rosa acicularis is a large, spreading shrub, characterized by branches bearing many thorns, some thin and bristly, others longer and more rigid. They, and the stems, have a reddish tint, while the abundant, green, pinnate leaves may also be red along the edges.

The cup-shaped flowers are large, up to 2.5 inches across, formed of five wide, overlapping petals around a center of short, thin, yellow-tipped stamens. Fruits (hips) are spherical, yellow to red in color. Plants can form dense colonies, spreading via roots. This a a common and widespread species, from north Canada to New Mexico, and was designated the state flower of Alberta in 1987. US distribution is mostly in the Rocky Mountains. 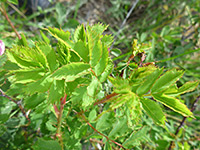