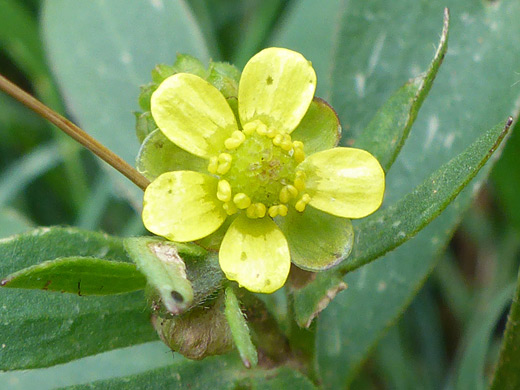 Ranunculus inamoenus is a small, inconspicuous species; the all-yellow flowers are at most 0.4 inches wide, and the stems are less than one foot tall. Stems are topped by between three and seven flowers, which have five greenish-yellow sepals, pilose hairy underneath, and five slightly larger petals, obovate in shape, and non-overlapping. At the center of the flower is a ring of about 20 yellow stamens surrounding a group of greenish pistils. These expand to form a compact column of small, globular green fruits, covered by short hairs, and with a tiny beak at the top.

Leaves are less divided than most other buttercups; those on the stems usually have just three lobes, the outer pair of which may be shallowly or deeply notched at the tip. The top of the lobes are rounded or blunt-pointed. Basal leaves are undivided, generally round in shape, with notches along the upper edge.

Most specimens are var inamoenus; the uncommon var subaffinis, found only in the San Francisco Peaks of north Arizona, has slightly larger sepals, and longer beaks on the fruits. 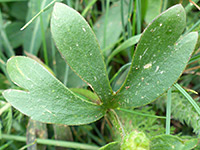 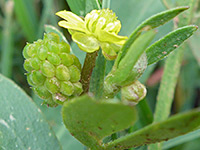