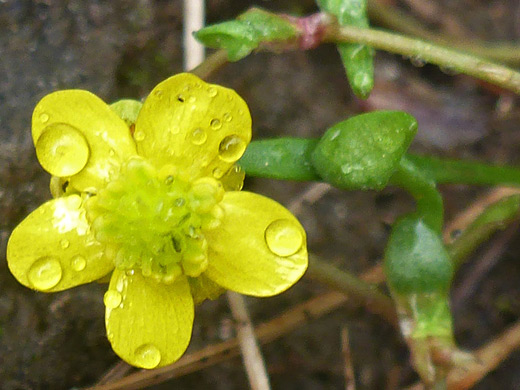 Ranunculus flammula is one of the smallest-flowered buttercup species, and is easily recognized owing to its habitat of lake margins and other shallow water areas. Stems can grow upwards but usually run sideways, along or just beneath the water surface; they may be hairless or sparsely strigose hairy. Stems take root at the joints. Leaves are usually fairly wide, either lanceolate or oblanceolate in shape, but can also be linear and thread-like. Leaf margins are entire or very finely serrate.

Flowers are formed of five yellow sepals, angled slightly below the plane, and five (less often six) larger yellow petals, around a center of yellow stamens with flattened anthers, and short green pistils. The petals are about a quarter of an inch long. Flowers are produced singly, on short, upwards-pointing stalks.

The uncommon var flammula has slightly larger flowers and is more likely to have erect stems; this is found in a few scattered locations in the Pacific Northwest. Two other variants have prostrate stems - var ovalis (the most widespread), which has relatively broad leaves, and var reptans which has thread-like leaves. 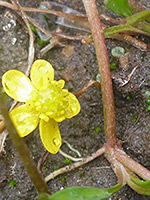 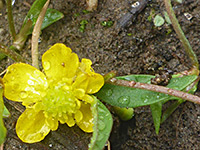