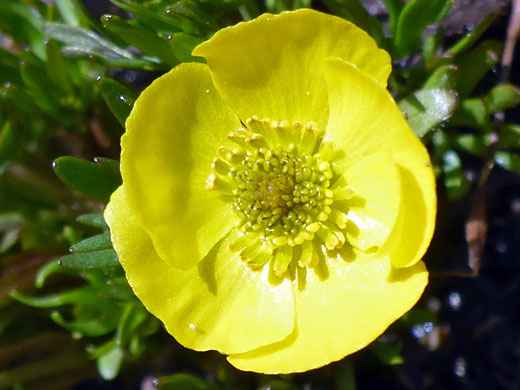 Ranunculus adoneus is a high elevation species, usually found in short grass meadows near the edge of melting snow; it is most widespread in the Rocky Mountains of Colorado and Wyoming, with smaller occurrences in Idaho, northern Utah and eastern Nevada.

Leaves are relatively small and are divided two or three times into linear lobes, round-pointed at the tip. Leaves grow at the base and at wide intervals along the stem, often just one pair. Stems are hairless, quite thick, erect or ascending, and are topped by one (usually) to three flowers, which are larger than the leaves, up to 1.5 inches in diameter.

Flowers have between five and ten yellow, wedge-shaped petals, and five shorter, greenish-yellow sepals, which have white hairs on the lower surface. Sepals are broad at the tip. The flower is cup-shaped; petals are overlapping, and curved up towards the tip. The outer edges of the petals are slightly irregular. 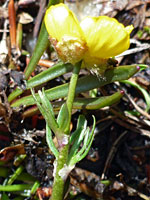 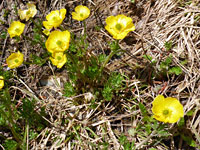