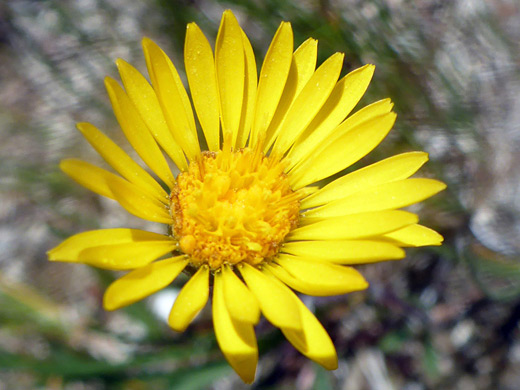 Pyrrocoma uniflora is quite variable in characteristics, and is most readily identified by its flowerheads, which are borne singly, though they may also be part of small clusters, of two to four. Plants may produce one stem or up to seven. Stems are non-glandular, reddish - especially around the base, hairless or sparsely covered by flattened, tomentose hairs. They may have leaves at closely-spaced intervals, or just one or two leaves. The long, narrow basal leaves are usually lined by sharp, quite well-separated teeth, but may be entire, or have only very small teeth, towards the top. Stem leaves are clasping, while basal leaves are stalked.

Flowerheads have a hemispherical involucre, up to half an inch across and one inch long, lined by two rows of phyllaries, generally unequal in length. Ray florets number from 18 to 50, the disc florets from 36 to 60.

The rare var gossypina of the San Bernardino Mountains in California is characterized by tomentose leaves, and often more than one flowerhead, while the common var uniflora often has hairless leaves, leaves less strongly toothed (or entire), and usually just one flowerhead. 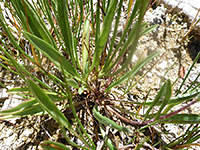 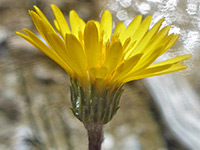