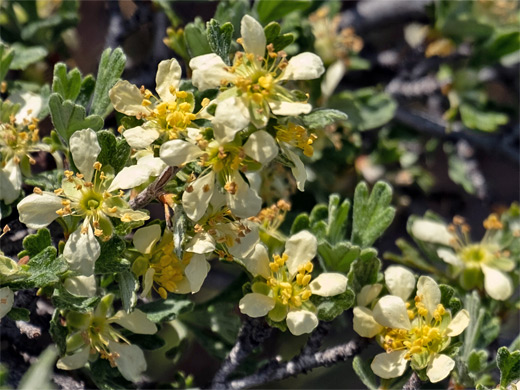 When not in bloom, purshia tridentata resembles sagebrush, or other low shrubs of arid regions, but its five-petaled flowers identify the species as from the rose family. Petals are colored creamy-yellow, less often white, and surround a group of between 17 and 35 stamens; these have pale yellow filaments and darker yellow anthers. Petals are obovate in shape and relatively small, at most a quarter of an inch long. Underneath are five shorter, pointed green sepals, visible from above between the petals.

Young stems usually have a covering of shaggy hairs, while older stems are hairless, and woody. Leaves are divided by about a third of their length into three lobes; one terminal, and a pair of side lobes. Often the terminal lobe is bent back a little, while the side lobes angle forwards. Leaf margins are rolled under. One or both sides of the leaves have a sparse hair covering. There are two varieties (var tridentata, var glandulosa), differentiated by leaf characteristics. 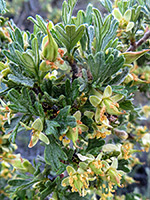 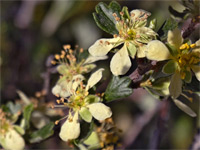