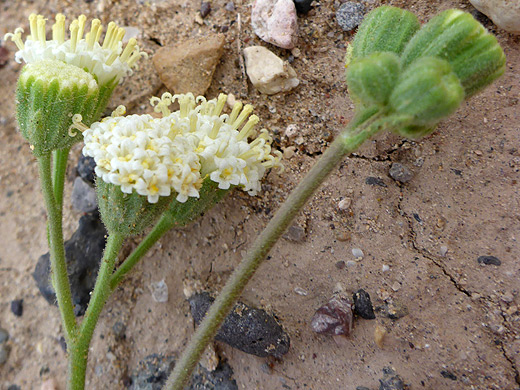 Psathyrotopsis scaposa, Dome Trail, Big Bend Ranch State Park, Texas
Psathyrotopsis scaposa, the only US representative of this genus, is found in Dona Ana county, south New Mexico, and four counties in far west Texas, including in and around Big Bend National Park. Plants typically produce one, two or three stems, branching a few times, and mostly leafless; the leaves grow around the base, on stalks. Leaf blades are round to triangular with rounded corners; they have shallow teeth along the margins and prominent, branched veins across the surface. Leaves have a fine tomentose hair covering. Stems and leaves are glandular (sticky). Flowerheads are produced singly or in small, flat-topped clusters.

There are no ray florets; the flowerheads are formed of between 16 and 50 disc florets, which have yellowish-white or bright yellow corollas, opening to five small lobes. The involucre is ringed by 8 to 21 green phyllaries, approximately equal in length, sparsely hairy. The usual spring blooming is often followed by a second flowering in the fall, after monsoon rainfall. 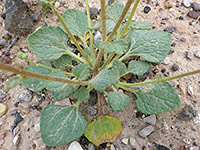 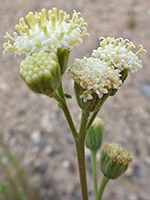