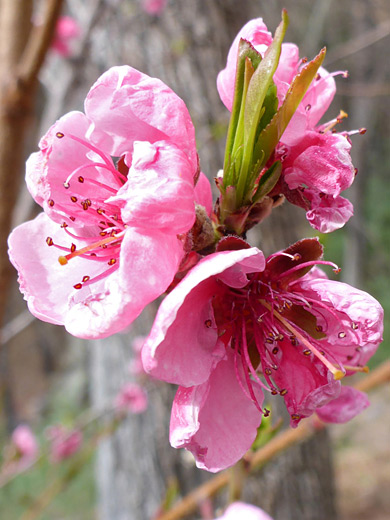 Prunus persica, the peach tree, is an Asian species, which has become naturalized in small parts of most of the Western states, most commonly in Arizona and southern California. Branches are hairless, and lack thorns. The dark green, deciduous leaves are produced in early spring, shortly after the flowers; they have a midvein and pinnate side veins, with finely toothed margins and a pointed tip.

The bractless flowers are produced singly or in pairs, from the nodes towards the end of the branches and at the tip. The flowers are formed of five short, purplish sepals, with fine hairs along the edges, and five larger, dark pink petals, up to 0.7 inches long, and approximately round in shape. At the center are between 10 and 30 stamens, and a longer pistil. Fruits appear between June and August. 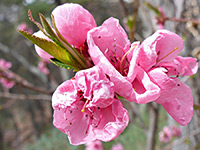