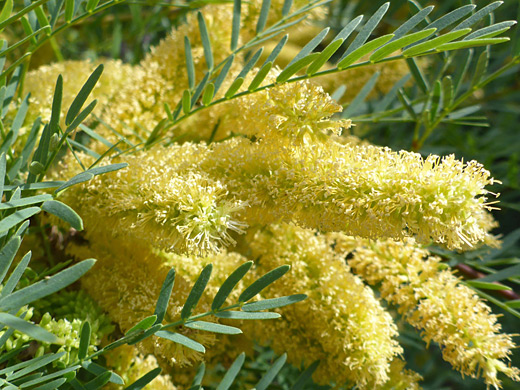 Prosopis glandulosa, one of three mesquite species in the West, is characterized by free rather than fused petals, straight rather than coiled fruits, and glabrous rather than hairy stems. Plants are trees or large shrubs, generally wider than they are tall. Branches are reddish when young, becoming woody with age, and they tend to arch downwards. They are armed with widely-spaced pairs of rigid thorns up to 1.5 inches long. Leaves are twice divided, the second into an even number of opposite, oblong leaflets around eight times as long as wide.

The inflorescence is a dense spike of hundreds of small flowers, which have a greenish-yellow, five-lobed calyx, five inconspicuous petals, and ten exserted stamens.

There are two main varieties: var glandulosa, of New Mexico and states to the east, has leaflets which are relatively long (up to 2 inches), and quite widely spaced, while var torreyana, from California to west Texas, has leaflets generally less than 1 inch long, and more closely spaced. 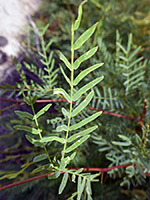