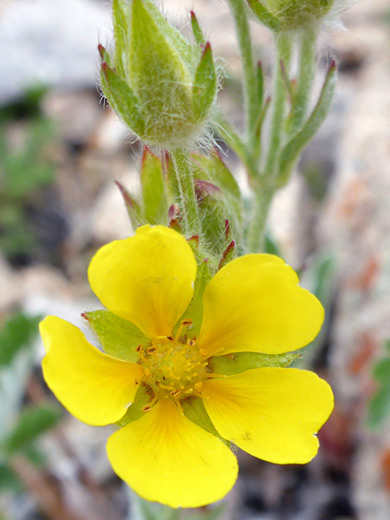 The five yellow petals of potentilla rubricaulis are narrow at the base, broad and slightly notched at the tip, and generally not overlapping. The petals have a tinge of orange at the base. Below and in between are five green sepals, about two thirds as long, with pointed, sometimes reddish tips. Below these are five, shorter, linear bractlets. Flowers are attached by stalks of up to 2 inches. Bractlets, stems and sepals are covered by long, white hairs. Plants produce up to 20 flowers, in open clusters at the top of the stems.

Stems are reddish, generally angled upwards. Basal leaves have either palmate or ternate divisions, and are held on stalks up to 3 inches long. The upper surfaces are bright green, and lightly hairy, while the undersurfaces are light grey to white, and more hairy. The three or five leaflets are lined with large teeth, cleft to between a quarter and three quarters of the way to the midvein. There are usually between five and eight teeth per edge, evenly distributed from base to tip. Stem leaves number two or three. 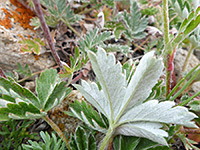 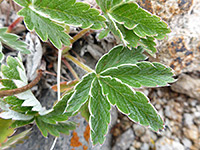 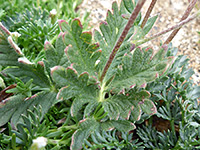 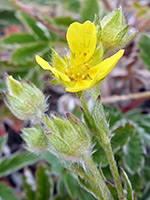 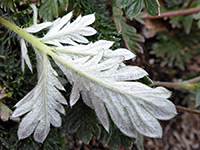