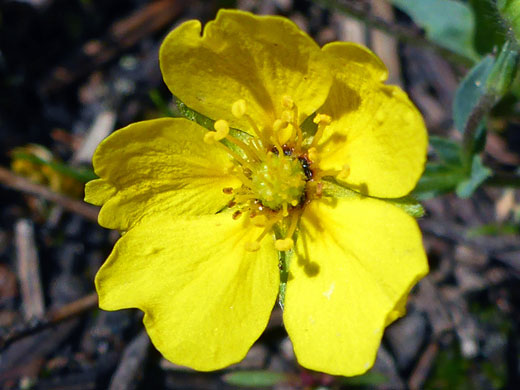 The green or reddish stems of potentilla glaucophylla rise up at a low angle, and bear leaves mostly at the base; these are bluish-green in color, palmately divided into coarsely-toothed leaflets. Leaves are attached by stalks of up to five inches which, like the stems, have a sparse to moderate covering of hairs, usually appressed. Leaves are generally divided into five or six leaflets (occasionally seven), which are lined by teeth, divided up to half way, or more, to the midvein. There are usually between one and three teeth per edge, less often up to five. Both leaf surfaces may have a light hair covering. Stems usually have one or two leaves, smaller and less divided.

The inflorescence is an open cluster at the top of the stems, usually containing up to ten flowers, but sometimes twice this number. Individual flower stalks are up to 2 inches long. Flowers have five narrow bractlets and five longer, wider, pointed sepals, all dark green and hairy, above which are five much wider, yellow, obovate petals, around half an inch long. Petals have a shallow notch at the tip. At the center are around 20 yellow stamens and a similar number of green carpels. The base of the stamens is reddish. 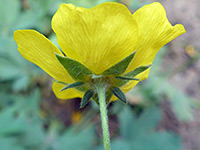 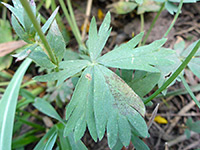 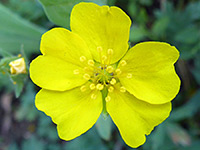 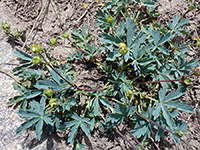 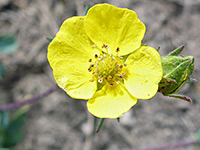 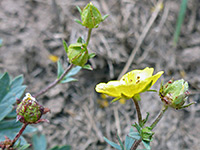 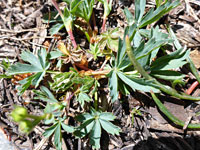 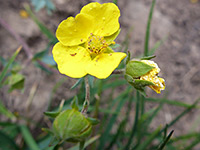