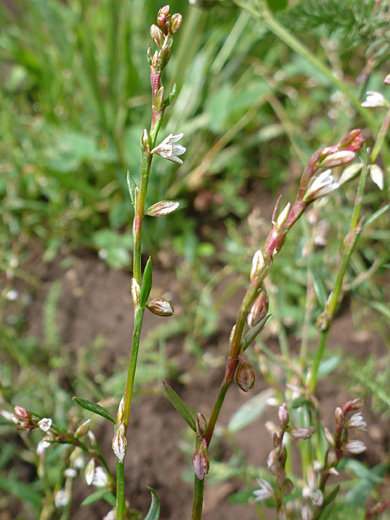 Polygonum douglasii is a relatively small, freely-branching but rather inconspicuous species. Leaves are narrow, numerous, and evenly distributed along the stems; they have a lighter-colored midvein, and a pair of stipules at the base. Basal leaves are short-lasting, usually withered by flowering time. The uppermost stem leaves are much smaller. Leaf margins may be entire, wavy or minutely toothed. Leaves terminate in a small spine. All plant parts are usually hairless. Stems are angular in cross-section.

Flowers form in small numbers at the top of the branches and at the upper leaf nodes. They have five overlapping white tepals, often with pink or greenish tints, enclosing eight short stamens. Tepals are fused at the base, to around a quarter of their length. Flowers tend to remain closed for most of the time. 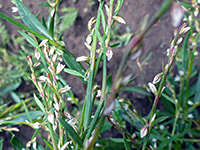 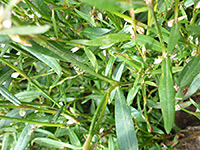