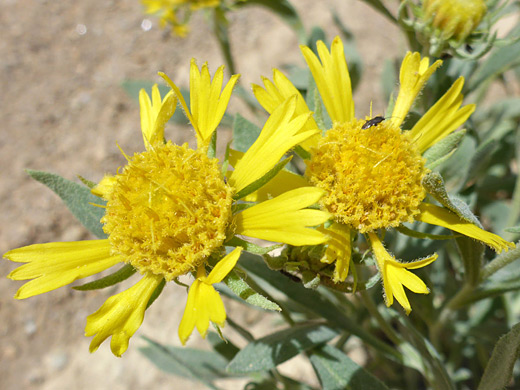 Two yellow flowerheads of platyschkuhria integrifolia, Buckhorn Wash Road, San Rafael Swell, Utah
Platyschkuhria integrifolia, the only species in this genus, is most common on the Colorado Plateau, where it inhabits arid, exposed places, often with little other vegetation, though it also occurs at higher elevations in Wyoming and a small adjoining part of Montana. The light green stems are short, usually around one foot tall, either erect or ascending and, like the leaves and phyllaries, have a covering of straight, appressed, white hairs. The greyish-green leaves grow at the base and at alternate intervals along the stem. Leaf margins are entire.

Flowerheads are produced singly or in loose clusters of up to 11. They have a relatively broad involucre, around one inch wide and half an inch long, enclosed by between 9 and 21 lance-shaped, glandular phyllaries (in two rows), also up to one inch in length. Phyllaries angle outwards when the flowerhead is fully mature. Flowerheads have between 6 and 12 yellow ray florets, which are wider towards the tip and partly divided into three or four lobes, and between 25 and 80 yellow-orange disc florets. These often form a sphere at the start of the fruiting stage, when all the ray florets have withered away.

Four varieties are sometimes recognized (oblongifolia, ourolepis, nudicaulis, desertorum), differing in the leafiness of the stems, the shape of the leaves, and the shape of the phyllaries. 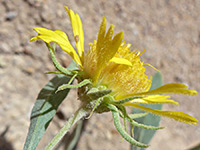 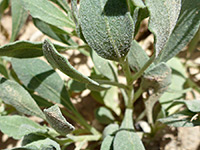 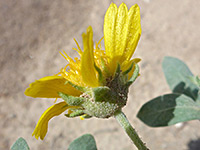 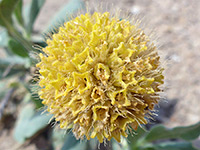 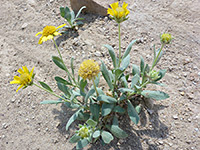 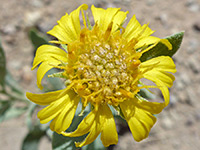