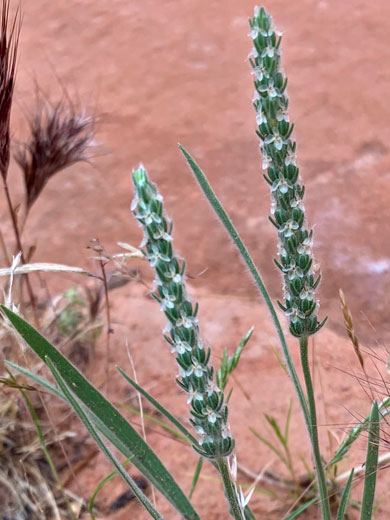 Plantago patagonica, woolly plantain, Grand Staircase-Escalante National Monument, Utah
Plantago patagonica is most frequent in southern Arizona and southern California, but its range extends across all the western states, where it is found at low to medium elevations, in varied habitats, often dry places with nutrient-poor soils. The common name refers to the woolly hairs, long and short, that cover the leaves, stalks and bracts.

The inflorescence is a group of elongated clusters along the upper half of leafless stalks. Flowers, paired or whorled, are tiny (0.1 inches across), formed of four white petals, bilaterally rather than radially symmetric, and four projecting stamens; these have slender white filaments and pale yellow anthers. Bracts are narrowly ovate or triangular, angled upwards or outwards.