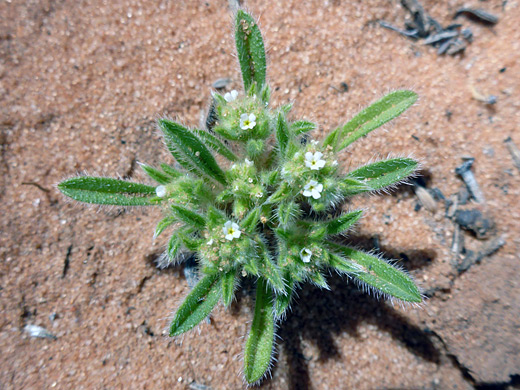 Plagiobothrys hispidulus is a common species inhabiting a wide range of elevations, from arid, semi-deserts where the plants are small, just a couple of inches tall, to wooded mountains, where they can exceed one foot. Stems may grow upright, angled, or sideways, along the ground. Leaves have a rough surface and a covering of relatively long, bristly hairs, most densely on the undersurfaces; the upper surfaces are sometimes hairless. Leaves may be folded up slightly along the midvein. Basal leaves are linear in shape, while those higher up the stems are more oblanceolate.

Flowers are small in relation to the leaves; they are formed of a green, five lobed calyx about 0.1 inches long, and an even smaller white corolla. The appendages at the base of the corolla lobes are yellow. The calyx lobes tend to curve outwards.