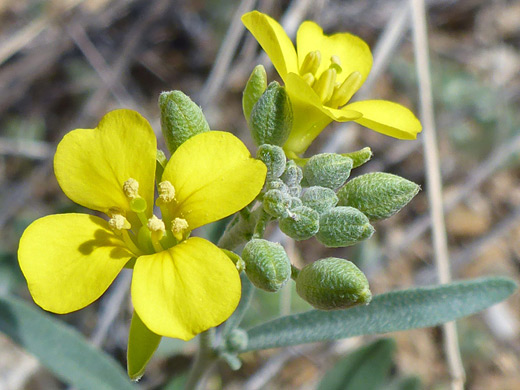 Buds and flowers of physaria gordonii, Hope Camp Trail, Saguaro National Park, Arizona
Physaria gordonii is most widespread in the Sonoran Desert of south Arizona, occurring also in the grasslands of south New Mexico and west Texas. Plants typically produce several stems, branching from the base, held at varying angles, from prostrate to upright; they, like the leaves, have a covering of short, rigid hairs, divided into between four and seven rays, themselves often divided. Stems are somewhat taller than many similar species in this genus, up to 17 inches. Basal leaves are narrowly obovate in shape, usually with shallowly lobed edges, while stem leaves are more linear, and are more likely to have entire margins.

Flowers are produced as a dense cluster at the top of the short stems, held on pedicels which lengthen during the fruiting stage, up to one inch. The four non-overlapping petals are clawed (distinctly narrower towards the base) and usually yellow, sometimes orange. Underneath are four sepals, in two opposite pairs of different shape; two are curved to form a hood, the other two expanded and sac-like. 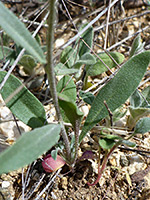