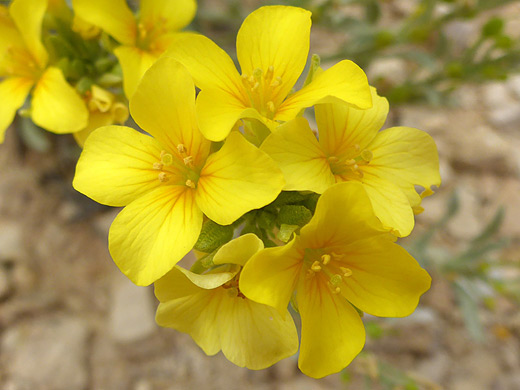 Leaves and stems of physaria fendleri appear greyish-blue in color due to a dense covering of small, branched (stellate) hairs. Plants produce many stems, growing close together, with alternate, upwards-pointing leaves at closely-spaced intervals. Stems are usually unbranched, and erect. Stem leaves are narrowly oblanceolate, about one inch long, and may be slightly curved up at the edges. Basal leaves are a little longer, and widest in the middle. Leaf margins are usually entire but may have a few teeth towards the tip.

The inflorescence is a dense, compact cluster at the tip of each stem. Flowers are formed of four green, oblong or elliptic sepals and four larger yellow, obovate petals, often tinted orange towards the base, which is narrow (clawed). Petals are crossed by veins, branching from the base. Fruits are nearly spherical, colored green, or reddish when mature. 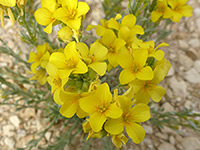 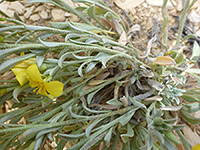