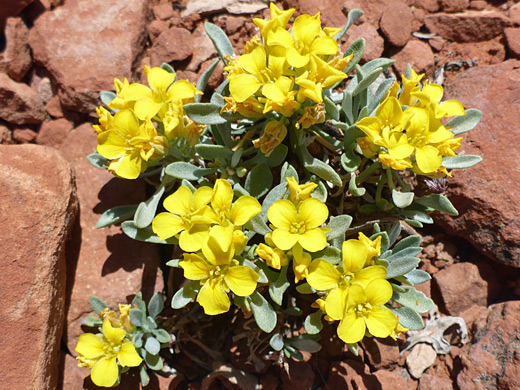 Leaves and flowers of physaria cinerea, Margs Draw Trail, Sedona, Arizona
Physaria cinerea is a small, low-growing species producing one or several stems from the base, sometimes just one inch tall. The hairs, or trichomes, which cover the leaves and stems are divided into several branched rays, and held close to the surfaces, giving the foliage a greyish appearance. Basal leaf blades are approximately round, attached by relatively long stalks, while stem leaves are more elliptic, and those towards the top are sessile, and narrower.

Flowers form in a small, compact cluster at the top of the stems. The four petals are yellow to orange in color, oblong in shape and up to 0.5 inches in length, narrowing towards the base (clawed), though less markedly than some similar species. Petal edges are slightly wavy. Two of the four sepals are slightly curved to form a shallow hood, while the other two are narrower, keeled and somewhat expanded. Sepals are a little shorter than the petals. 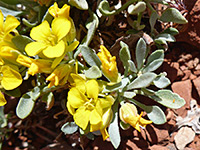