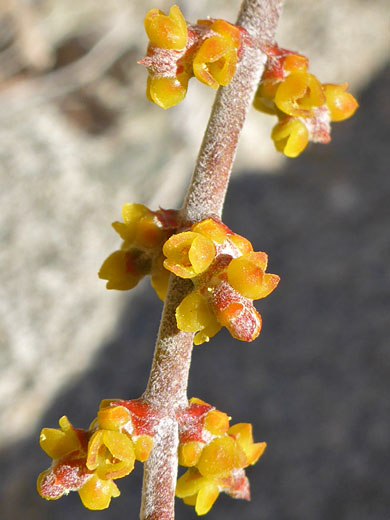 Phoradendron californicum (desert mistletoe), Lost Palms Oasis Trail, Joshua Tree National Park, California
Phoradendron californicum is widespread across the Mojave and Sonoran deserts, where it is (partly) parasitic on various plants, mostly bushes from the fabaceae family, including acacia, parkinsonia (palo verde), prosopis (mesquite) and simmondsia (jojoba). Stems are green to red and are covered with fine, greyish pubescence, at least for new growth. Leaves are reduced to tiny scales, at the nodes, around one inch apart.

Plants are dioecious, bearing either male or female flowers, each in small clusters, on short stalks, at the nodes; staminate flowers are in groups of six to 14, pistillate in groups of two (usually) to four. Both types of flower have three small, relatively thick petals, colored yellow to orange. Fruits are round berries, up to 0.3 inches across, yellow to red. 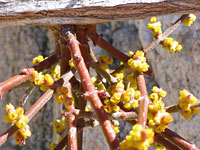 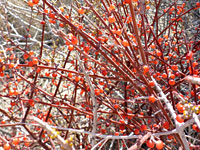