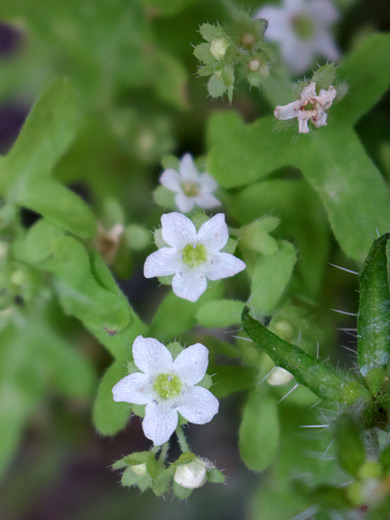 Flowers of pholistoma membranaceum are small compared to the leaves, around a third of an inch in diameter. The five-lobed corolla is pale green at the center, otherwise white, usually with a thin purple streak along the midvein. The five equal-length stamens and the two-lobed style are short, included within the corolla throat. The calyx lobes are broad, ovate, light green, and lightly covered by bristly hairs, especially along the margins.

Flowers form in small clusters (between two and ten heads) at the top of the branches, and opposite the upper leaves. Stems are grey-green in color, and much branched; the branches tend to lean over towards the ground. Leaves are divided into an odd number of broad, round-tipped lobes, covered by short bristles; uppermost leaves have three lobes, the lower up to 11. Leaves are attached by short, winged petioles. Lower leaves are alternate, the upper opposite. 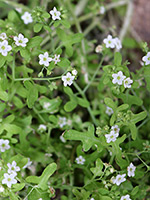