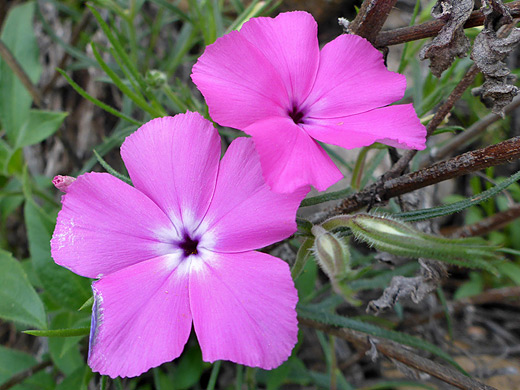 Stems, leaves and calyces of phlox mesoleuca have a sparse covering of glandular hairs. Leaves are long and narrow, growing in about five opposite pairs at even intervals along the slender stems, which are reddish at the base, green higher up. Leaves have a prominent midvein. Plants are perennials, their size varying from year to year depending on the amount of rainfall. This species is one of few in this genus that inhabits hot, dry regions, its range restricted to the Chihuahuan Desert of Texas and New Mexico.

The corolla tube is around 0.7 inches long, and it opens to five obovate loves, slightly frilly along the top. Lobes are uniformly colored pink (less commonly white, purple or yellowish) except for the base which is white, or very pale yellow. The inside of the corolla is darker pink, and the five stamens and one pistil are not exserted. The calyx is similar in length to the corolla tube, and its five narrow, green lobes are fused for the lower half, separated by thin, white membranes. 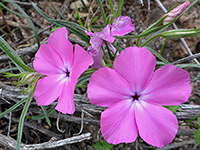 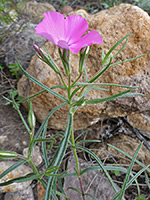 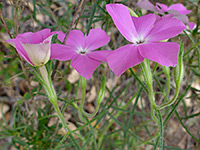