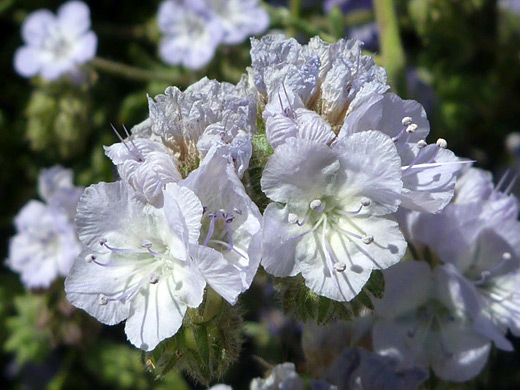 The flower color is perhaps the most distinctive aspect of phacelia ramosissima; this varies from pure white to pale lavender, not the darker blue/purple of many other species in this genus. The plant is geographically widespread, found in many habitats and over a wide range of elevations, hence is variable in appearance and characteristics, but is generally tall, spreading and many branched, with stems growing upwards or at an angle. There are six recognized varieties. Stems and leaves may be hairless or quite densely hairy, and the surface can be sticky (glandular). Leaves grow mostly along the stems, rather than at the base.

The inflorescence is a one-sided, coiled cluster, with flowers essentially stalkless, subtended by green calyces which are split into five narrow lobes, somewhat different in shape. The corolla tube is short and the five petal-like lobes spread fully, exposing the five exserted, purplish-white stamens and a divided style. 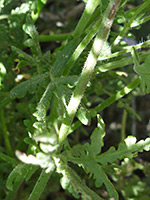