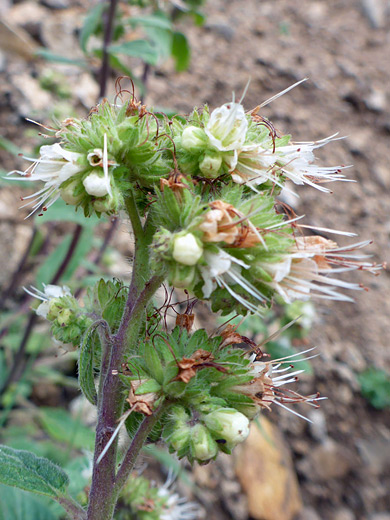 Phacelia heterophylla along the Manns Peak Trail in the La Sal Mountains, Utah
Common name:
Variable-leaf phacelia
Family:
Borage (Boraginaceae)
Scientific name:
Phacelia heterophylla
Main flower color:
White
Range:
The Rocky Mountain states and all states to the west
Height:
Up to 3 feet
Habitat:
Dry, open places; 4,000 to 11,000 feet
Leaves:
Ovate to lanceolate, usually lobed at the base; up to 5 inches long
Season:
May to December

Phacelia heterophylla usually produces just one, branched stem, colored green or red, bearing deeply veined leaves at alternate intervals. The leaves often have one, two or three pairs of smaller leaflets at the base. Leaf veins have a pinnate arrangement. Leaf surfaces are covered with short, white, spreading, bristly hairs; the stems are also hairy. Leaves grow on stalks, as long as or longer than the blade.

The calyx is light green and hairy, divided into five lobes less than a quarter of an inch long, lengthening slightly during the fruiting stage. The corolla is similar in length, colored white to lavender, containing eight stamens and a style, divided to about half its length. Flowers are small and wither quickly, the corollas becoming light brown, though the stamens persist rather longer. Flowers are borne on a cluster of curving stalks, and they tend to point in the same direction, angled upwards and outwards. 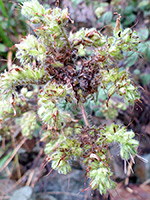 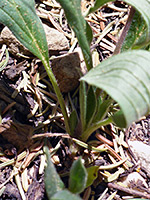 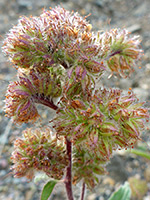 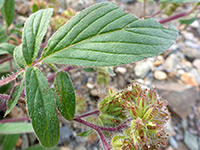 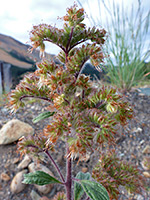