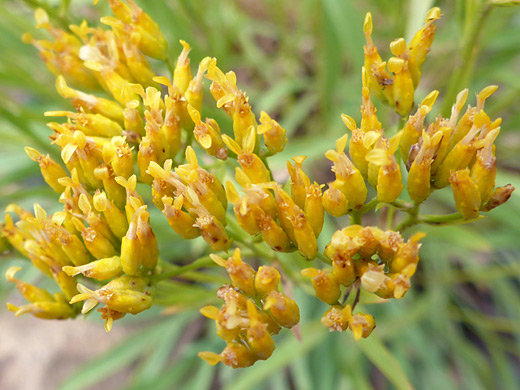 Petradoria pumila, a species in a monotypic genus, is distinguished from other goldenrods by having phyllaries in vertical lines rather than spiralled. The phyllaries are light yellow or brownish, slightly darker at the tips, up to a quarter of an inch long, and remain pressed against the narrow, cylindrical involucre. Flowerheads contain 1 (least common), 2 or 3 pistillate ray florets, and 2 to 4 staminate ray florets. The inflorescence is a dense, flat-topped cluster, and a plant may produce up to 20 stems, or more, creating a prominent clump.

Leaves grow at the base and at alternate intervals along the short stems. They have a center vein and one or two pairs of parallel lateral veins. Margins are entire. Leaf faces are hairless, but somewhat rough, and dotted with tiny glands. Plants typically retain dead, brown leaves from the previous year, their veins darker, and more prominent.

Two varieties of petradoria pumila are sometimes recognized: var graminea has narrow leaves, usually with only one vein, and a single ray floret, while the more widespread var pumila has wider leaves with three or five veins, and two or three ray florets. 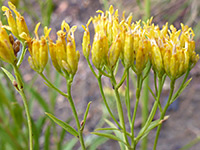 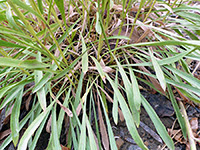 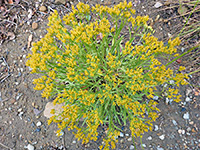