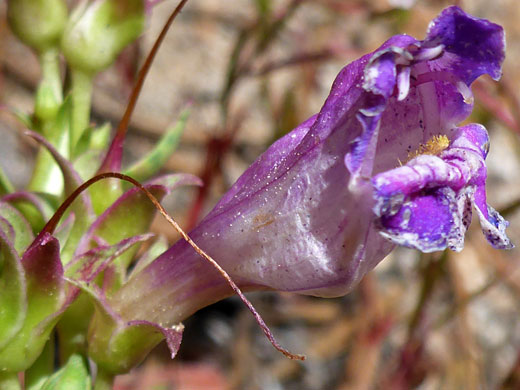 Penstemon speciosus is found in Nevada and the Pacific states, over a wide range of elevations, though not in general near the coast. Stems and flowers may have a sparse covering of short hairs but are usually glabrous. Leaves grow all along the stem, not concentrated at the base, and are longest above the middle of the stem; they have a single vein, and are often partly folded up along the axis.

The calyx is about 0.4 inches in length, divided into five lance-shaped lobes, often purplish, while the blue or purple corolla is much longer, up to 1.5 inches, and is narrow at the base, widening abruptly below the middle. The two lobes of the upper lip are recurved just below the tip, while the three lower lobes are more completely bent back, held at an angle of around 90 degrees. The margins of the four anthers are hairy, as is the tip of the infertile stamen that lies along the floor of the corolla. 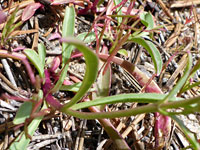 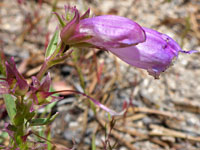