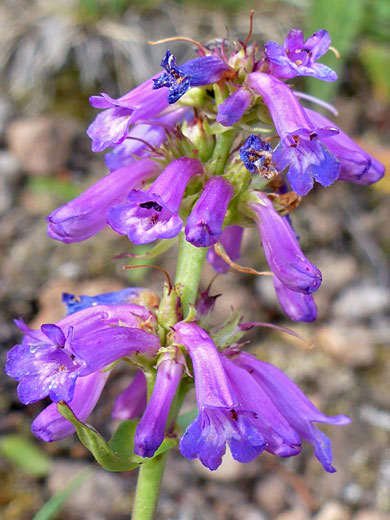 Identifying features of penstemon procerus include the hairless anthers and hairless inflorescence, the relatively broad leaves, and the clustered flowers, in a spherical grouping at the top of the stem, and one or more closely-spaced whorls just below. This species has a wide distribution over a large elevation range, from the Rocky Mountains in Colorado across to California and the Pacific Northwest, resulting in variation of such aspects as height, leaf width and pubescence; six varieties are recognized.

Other plant parts are also usually glabrous, though the lower stem may have a covering of very short hairs. Leaves grow around the base and all the way along the stem; stem leaves are smaller. Calyx loves are ovate, quite pointed at the tip, and are much shorter than the tubular corolla, which widens only slightly from the base, opening to a two-lobed upper lip and a longer, three-lobed lower lip; all lobes are recurved by a similar amount. The base of the lower lobes is whitish on the inside. The tip of the infertile stamen usually has a few orange hairs. 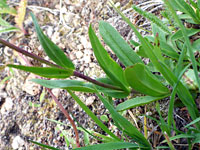