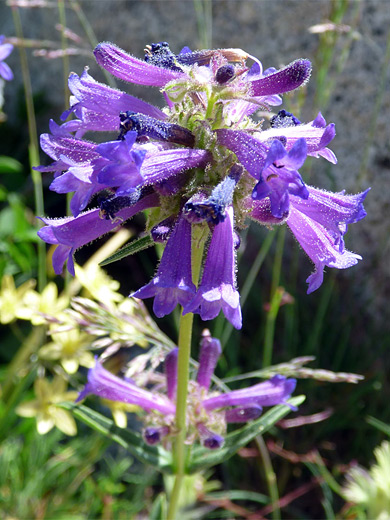 The inflorescence of penstemon heterodoxus is quite distinctive; compact, dense, whorled clusters of flowers at the top of the stem, pointing outwards in all directions. Clusters are separated by an inch or more of the stem. Leaves grow at the base and along the stem. Plants are low-growing, and form mats. Leaf edges are often folded up along the axis. Stem and leaves are hairless, though the outside of the corolla is glandular, with a covering of short, sticky hairs.

The corolla is about half an inch long, cylindrical or only slightly wider towards the end, and colored deep bluish-purple. The inside of the corolla is yellowish brown, and noticeably hairy. The five corolla lobes are much shorter than the tube, and similar in both size and angle.

There are three varieties of penstemon heterodoxus. Var heterodoxus is a small species, less than eight inches tall, usually with just one flower cluster. The less common var cephalophorus and var shastensis have more than one flower cluster - up to six. The former is strongly glandular, the latter less so. 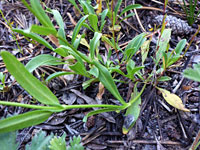 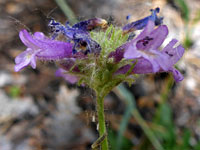 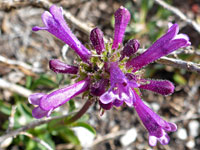