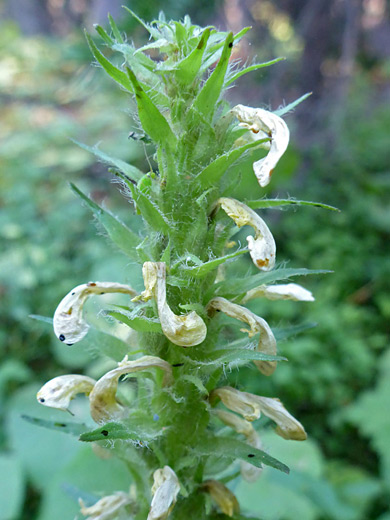 The stout, unbranched, light green stems of pedicularis bracteosa are usually about 2 feet tall, though they can exceed 3 feet. Leaves are fern-like in appearance, divided into pairs of dark green leaflets; at the base and at wide intervals along the stem. The central stalk is colored lighter green. Basal leaves are often withered at flowering time.

The dense, narrow inflorescence extends across the upper half of the stem - up to 12 inches. The tubular flowers are pale yellow, sometimes with purplish tints, and they open to two lips; the upper is hooded, arching downwards, while the lower is straight, and shorter. The corolla is around one inch long. Flowers become light brown as they wither. Flowers are subtended by hairy, lance-shaped bracts. Flowers open from the base of the cluster upwards.

Pedicularis procera is a similar species, somewhat taller, and differentiated by the presence of red veins on the flowers and bracts. There are eight varieties of pedicularis bracteosa, the majority restricted to the Pacific Northwest, and differing mainly in the petal and sepal characteristics; var paysoniana is the most widespread variant. 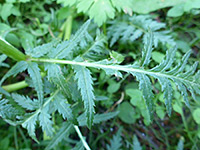 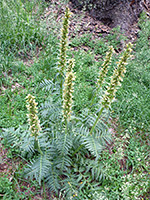 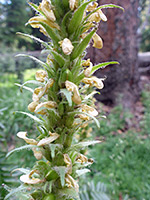