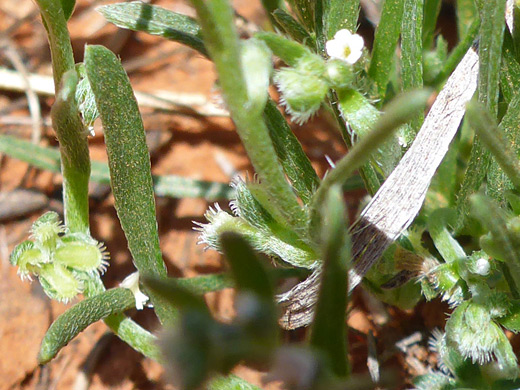 Pectocarya heterocarpa is a low-growing plant of desert areas, distinguished from other species in the genus by its nutlets, of which there are four, arranged in a flattened cross-shape, and lined by sharp, transparent teeth, mostly around the apex. Two of the nutlets have a prominent, lighter-colored margin. The tiny flowers are formed of five white petals, yellow at the base. The calyces have five unfused lobes, approximately equal in size at first, becoming unequal by the fruiting stage (three smaller than the other two).

Leaves are clustered, at the base and along the stems; they have a recessed midvein, and a light covering of spreading, strigose hairs, Leaves tend to curve upwards, as do the stems. 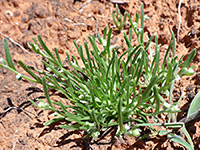