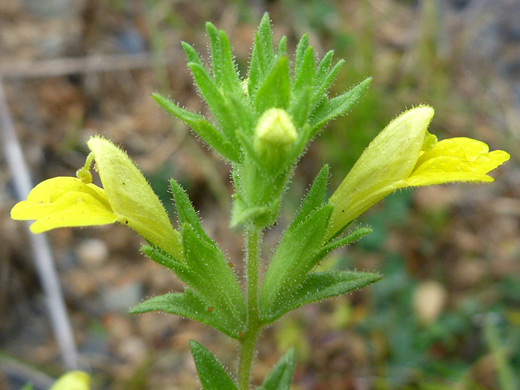 Parentucellia viscosa is a European species, introduced to the US, where it is most widespread in coastal regions of the three Pacific states. Stems and leaves are covered by short, sticky, glandular hairs. Coarse-toothed leaves grow at the base and in opposite pairs along the lower portion of the stems, while leaf-like bracts are positioned just below the flowerheads in the elongated inflorescence at the top of the stems.

Flowers are supported by a green calyx, divided by a half to a third of its length into four large, equally-sized, lanceolate lobes. The yellow corolla has two lips; the upper is entire, and arches to form a hood, while the lower is partly divided into three rounded lobes. The surface of the lower lip is raised just below the notches between the lobes, forming two ridges. The flower center contains two unequal pairs of stamens, partly hidden by the upper lip. The broad, cylindric green fruit project just beyond the fused section of the calyx. 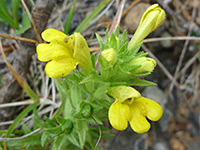 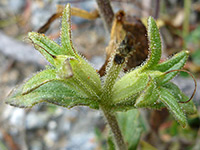 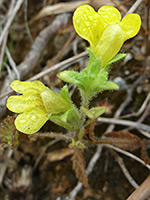