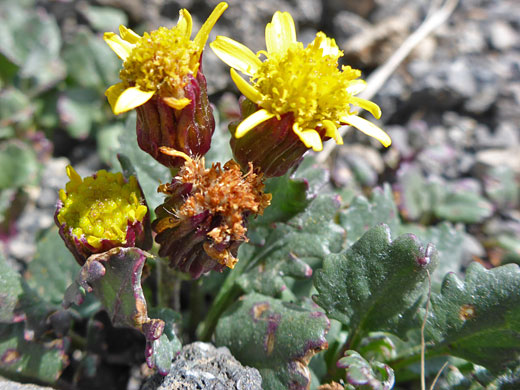 Packera werneriifolia is a low growing, high elevation species, most common in the Sierra Nevada and the southern Rocky Mountains. Plants produce a single stem, or between three and five, which have a few bract-like leaves; otherwise, leaves grow only at the base, and can take two distinct forms - ovate or nearly round blades, on stalks about the same length, with (usually) a few rounded edge teeth, or sessile leaves with much narrower blades, and mostly entire margins. The latter form are somewhat longer, up to 1.5 inches. Leaves have a sparse to medium covering of tomentose hairs.

Flowerheads are relatively large, compared to the leaves, and they form as a small cluster, of up to five. Phyllaries number 13 or 21, and are often purplish. Ray florets may be absent, but if present there are either eight or 14, around a group of up to 50 disc florets. 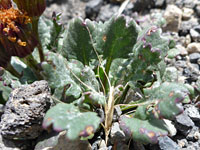 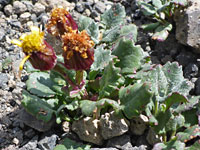