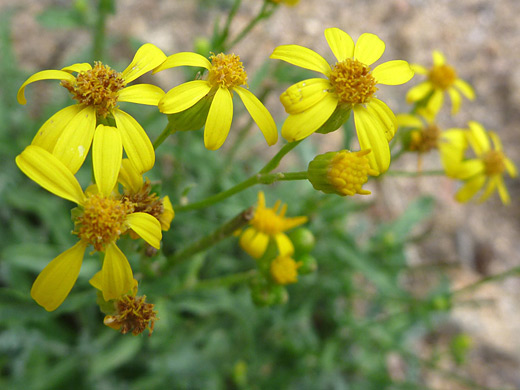 Flowers of packera fendleri are somewhat unremarkable, usually with 6 to 8 yellow, backwards curving ray florets around a center of 30 to 45 yellow to brown disc florets, but the leaves are quite distinctive. They grow mostly at the base, are greyish-green in color and have large, wavy, rounded lobes along the edges, cut to or almost to the midvein (pinnatifid or pinnatisect). Flowers form open, even-height, flat-topped clusters, typically containing between 6 and 25 heads. The 13 phyllaries at the base of the flowers are green, linear and have pointed tips. The plant is widespread across the southern Rocky Mountains, growing in a range of elevations and habitats. 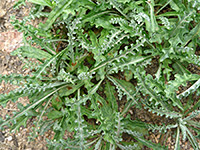