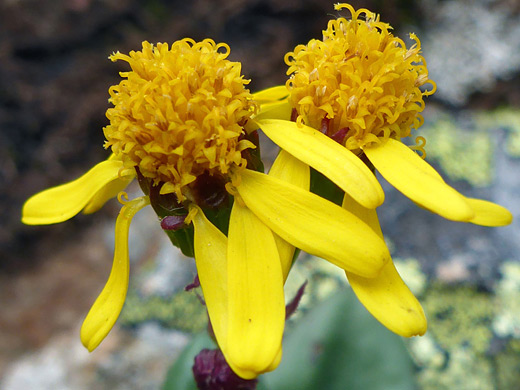 The species name of packera dimorphophylla refers to the different forms of the leaves, at the base and along the stem. All leaves are bright green, hairless and quite thick; those at the base are attached via stalks, often winged, have edges either entire or shallowly toothed, and are variable in shape, from nearly round to ovate, lanceolate or reniform. In contrast, the few stem leaves are stalkless, and usually irregularly lobed. Upper stem leaves are bract-like, reduced in size. Plants usually produce one stem, sometimes two or three.

Flowerheads form singly, or in small clusters (up to six). They have 8 or 13 yellow to orange ray florets, 45 to 60 yellow ray florets and 13 or 21 phyllaries. The phyllaries are equal in length, hairless, green towards the base and purple near the top. At the base of the involucre are several purple-tipped bractlets, the calyculi.

There are three varieties of packera dimorphophylla; most common is var dimorphophylla, which has conspicuously winged basal leaf stalks, gradually tapering basal leaf bases, and unbranched stems. This is found in high elevation meadows and slopes, above 9,000 feet. The other two, both uncommon, have leaf stalks lacking prominent wings, and variously shaped leaf bases (not smoothly tapering): var intermedia and var paysonii. 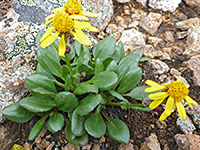 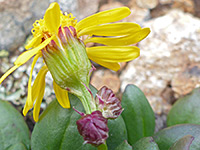 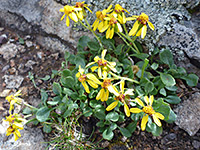 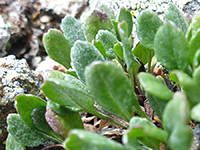